Scooter is a big, dumb arena rock act — but since they’re German they do techno. They’re as brainlessly self-aggrandizing, self-referential and self-conscious as Kidd Rock, Monster Magnet or club hiphop. 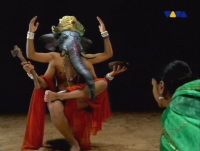 Download the uncensored video for “Weekend,” and you’ll start to get it. The director’s concept seems to have been “Alexander the Great.” It’s become a mini-addiction for me. Lead singer H. P. Baxxter rides in cape and armor with three sometimes topless multiethnic dancing girls upon a boat carried by a sea of Buddhist monks. Warriors and dancers appear in fast cuts on a dry nighttime plane, the frames shooting psychotically from the beautiful (three girls making out in the snow) to the disturbing (passable CGI replacements of Baxxter’s head onto a line of boys). A striking Hindu dancer crawls toward Ganesha — the height of my guilty pleasures. Baxxter’s face morphs awkwardly out of a man’s back to kill the fun. There’s a maybe virgin Mary in heavier eye makeup than Filter’s “Take A Picture” mermaid. Nothing is held up long enough for rational thought. It’s a wonderfully terrifying thing.

You’re not supposed to feel good about listening to this music. The clever flourishes don’t make it okay. The dozen platinum albums don’t either. Forcing you to admit that there’s some flaw in you that enjoys the music is Scooter’s only redeeming characteristic.