Among any number of negative habits is my tendancy to come up with an idea out of desperation at the last minute, play with it for a little while, and then fall in love and want to dump six months into it. Class workshops on different aspects of game design usually trigger this problem. This one is no different. (See also a simple RPG I’m trying to get working in Tabletop Simulator.)

As boring as it sounds, being a lighthouse keeper was as much about lifesaving as shipwreck prevention. A certain solitary type seems to have been attracted to the United States Treasury’s Lighthouse Establishment/Board/Service between 1791 and 1939 (which I think we can agree encompasses the “Golden Age” of lighthouses). Hoisting a dory into four-meter swells from a flooded gear room at the base of the tower in a pitch-black howling gale was a job requirement, and having a sturdy dog with sharp senses and no fear of the water along wasn’t all about companionship. (“Saved,” from the Louis Prang Collection commemorates a real lighthouse dog’s rescue of a child.) Denis Noble’s Lighthouses & Keepers is a good intro to this world.

I’m attracted to the character of an Indian man serving as a keeper sometime around the turn of the last century–someone like WWI US Army Sergeant Bhagat Singh Thind, who under the racial ideas of the time tried and failed to gain US citizenship when the Supreme Court ruled that, while “Aryan” he was not “white.”

I envision an adventure game made up of episodes (equipment failures, hurricanes, shipwrecks) with free exploration segments before the crisis portion triggers, in which you wander the lighthouse with your dog, read water-damaged books (real ones) about “race science” and other odd but consequential ideas for your character’s situation, and maintain the equipment. The offshore lighthouse serves as a metaphor for your own situation, literally defending a shore you can never reach. In these quiet moments, most of your default push/pull interactions are small acts of cleaning and maintenance (and scritching your dog). I want to make you complicit in the feeling that you’re constantly–even lovingly–maintaining this life-preserving tower.

In truth, an offshore lighthouse was manned by a crew of 3-4. Many keepers were married, and raised families at the facilities. The “solitary” aspect would be a departure from strict historicism–though sickness, injury or just plain poor manpower planning could easily leave a single hand to run a light. It was a quiet and hardworking life, though vastly superior to the sailing trade most keepers left.

I’ll leave you with this cutaway of Britain’s Eddystone Lighthouse, and an 1892 magazine article describing a visit there. It’s a fun topic to get lost in for a few hours. But for now, I think it’s best I leave it at that. 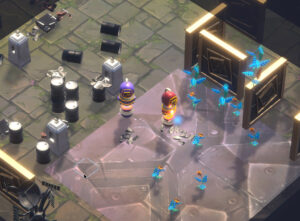 It was always an ambitious project, and not everything made it over the finish line.

UI Feedback: There’s a lot happening behind the scenes that the game doesn’t explain well. Every “CPU” (the brains of the robot, but also a physical robot part in the game) has randomized stats: Processing, Memory, Inputs and Outputs. These special stats aren’t altered by Upgrades, but they can be boosted by being close to (“meshing with”) nearby robots with higher stats. Processing governs how often an AI-controlled bot can reevaluate its choices. Memory is how much you can’t see but can “remember”–the fog of war. Inputs allow you a certain number of sensors you can equip. Outputs allow a set number of moving parts you can control. Likewise, damage isn’t well described, although your damaged parts do noticeably work less well.

Multiple “Car” Robots: Everything the bots do is designed around being able to take up more than one tile, dragging parts behind like train cars. Sadly, none of this made it into the final game, making even the word “convoy” seem slightly out of place. Bots sitting on top of other bots, and being carried along is–as best I can tell–entirely possible even in the demo build, but without trailers there’s not much point to it. So, no, we don’t get to play Tiny Convoy: Fury Road.

The Conversation Grid: The idea was to coordinate with your convoy without using words. You’d click on a friend and their internal map (from the Pathfinder) would come up as a grid of little icons. You could click on things to give them “ideas,” or to dissuade them from doing something dumb. It would have fed into their AI, not as a command, but as one of the AI’s competing ideas, with a boosted weight–sort of like the forgotten but brilliant “Galapagos.”

This is Running Long…

With those caveats, there is the start of a fun little game here. The many interacting systems largely work as intended, and cross-talk in interesting ways. The whole visual and audio presentation is inviting and detailed. With more content, fine-tuning and iterative playtesting, this could easily become a very good game.

But, on to second semester!

"The use of coal is simply exporting far too many future costs on society; its current use is only economical because we pretend those costs don't exist." -John Timmer, Ars Technica

At some point, most classical music start to sound to me like the "Bippity Boppity Boo Suite."

Does everyone else on Twitter get spam notifications about Lebron James? Including people like me who don't give a sh** about sports?

No one: …
Me: What song would work for a marching band and as a lullaby?

Can we just knock this sh** off with Americans pretending to have a British football club preference?