Stitched together in Hugin from 37 camera phone pictures.

“We are not a duo! You’re a heavy little demon who won’t get off my back.”

“Think about it. I’m always by your… side. Pointing out danger. Listening. Maybe you’ve forgotten, but you called me.”

“Why the hell would I call you?”

“Because you are so alone in this world.”

Stitched together in Hugin from 5 camera phone pictures.

Stitched together in Hugin from 28 camera phone pictures.

Of all the challenges I thought I might face as an adult, having an invisible demon on my back weighing me down wasn’t one of them.

“Take this chalk,” he said. “Draw a line with it on the floor. Cross it. Look back.”

“Now do you understand?”

I’m in the “husbands’ box” with a few other tired-looking guys, working late on my laptop. The game is about halfway through. We have a vulnerable lead. It’s beginning to rain. She’ll be muddy, cold and irritable when she gets off the field. I expect she’ll want to go straight home instead of soaking in the clubhouse. I happen to be looking up vaguely as Fukuyama #43 sends a line drive past the first baseman. My wife scoops it up, pops it back to first and ends the inning. I take a sip from my can of tea, feeling like a good husband.

“Nine for twelve? That’s a pretty good season!” The little girl nods shyly under her baseball cap, clutching an autographed notebook page. Local celebrity means something here. She’s an obvious pro, bobbing her head and grinning like a tv idol as she fills the girl’s head with league softball dreams. My wife’s plan is to become a history teacher when she retires from the league, preferably at a lower secondary (middle) school. I suspect she just wants to do it so she can coach a girls’ team. She’d be good at it. The late evenings away from home will continue long past her softball career, but at least she’ll be able to ditch that haircut.

We’ve made dinner, eaten, and worked down through a bottle of sake, chatting quietly on the floor. Her face is bright red. Is that what I’m laughing about? I don’t remember. Everything is good. We roll around on the carpet giggling. Soon we’re making love. She’s giving me the baby eyes. This is why I came here. Sometimes it all makes sense. She’s out by the time I put her to bed. I get her a glass of water, and down one myself. She snuggles against my hand as I lay down beside her, breathing hard in her sleep.

“What is the MATTER WITH YOU!?” she yells in Japanese, tears streaming down her face. I don’t understand this mood. She calls me stupid, shit, foreign. Hard little fists smash like fireworks against my chest and arms. She’s much too fast to block. All I can do is force myself closer and take the windup out of her punches until she cries herself down. It won’t take long. Domestic violence only became a crime here in 1997. I’ll be sore tomorrow. She’ll be distant tonight, then overly upbeat, and probably do something for me. This is deeper than me being boneheaded, and not a real couple’s fight. It just happens, once or twice a year. All I know is that her life is an elaborate comedy of manners that I’m too dense to understand, and sometimes it’s too much for her.

It’s the annual Husbands Game — actually a mishmash of husbands, boyfriends, and more than a few dads. (The qualifications are flexible.) We’re humiliating ourselves as usual along with the equally hopeless men from Himeji, but it’s all for a good cause. Mishina’s dad just huffed and puffed his way to a base hit. The local diehard fans are Queen stomping. Hyuuga’s boyfriend played college ball and he’s up after me. If I can get at least a single, we might do okay. I spot my wife in the stands and trip over a bat, to more cheers from the crowd. She does an elaborate, Kabuki-grade facepalm.

When we met, I bought her a drink, not knowing that I probably shouldn’t do that when she was out bonding with her team. We dated for about a week. I remember feeling that I’d hit a wall in getting to know her. I might have called it off. Then everything went wrong. It was the year her team failed to reach the Championships, for the first time since 1995. People were going to be fired. She was taking it hard. She needed company, couldn’t maintain a face. Two fans had committed suicide. It was the worst day of her life. She called me a little before midnight, and poured her heart out in the back of a steakhouse.

We’re home. Practice was cancelled. It’s a Tuesday evening. We’re on the lawn playing catch in the fading light. Her throws are perfect, flat and quick. I lob it back to her. The phrase “speaking with silence” comes to mind, one I’ve never understood. She watches me instead of the ball. Her eyes are smiling. There’s a weird tranquility to the moment. The lull of the neighbors’ kids bubbles over the hedges. My wife looks content.

I did some carving this evening. Raccoon, or monster? You decide. Click for bigger. 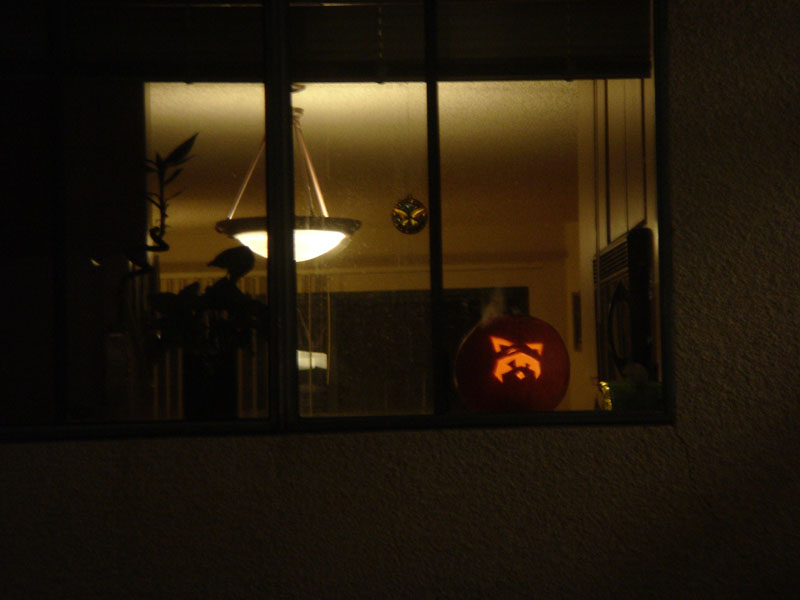 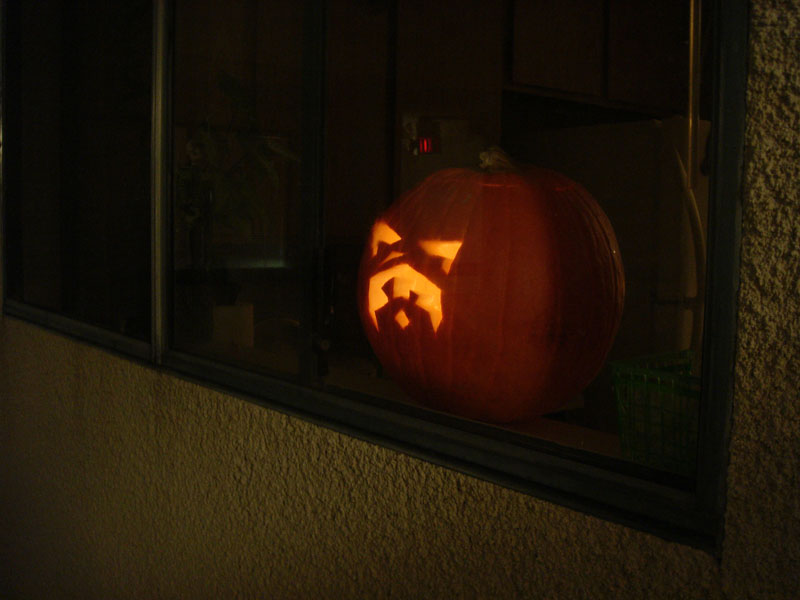 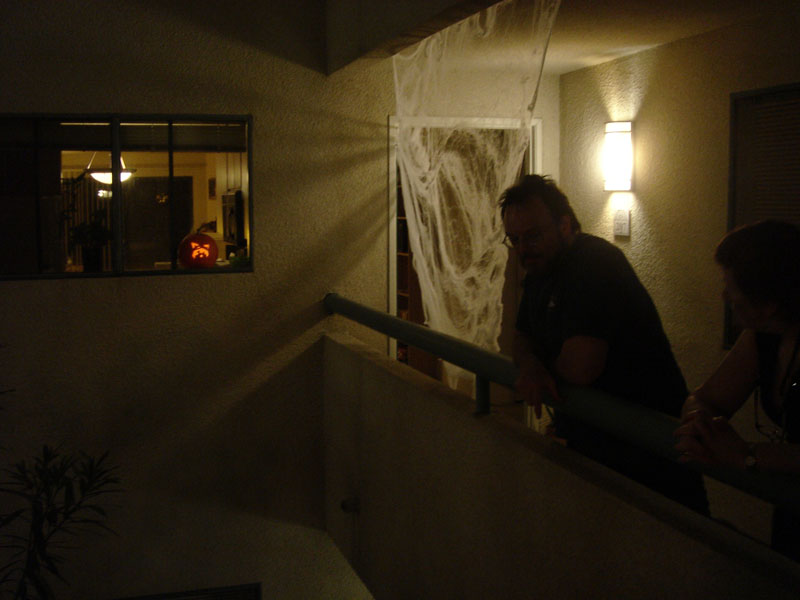 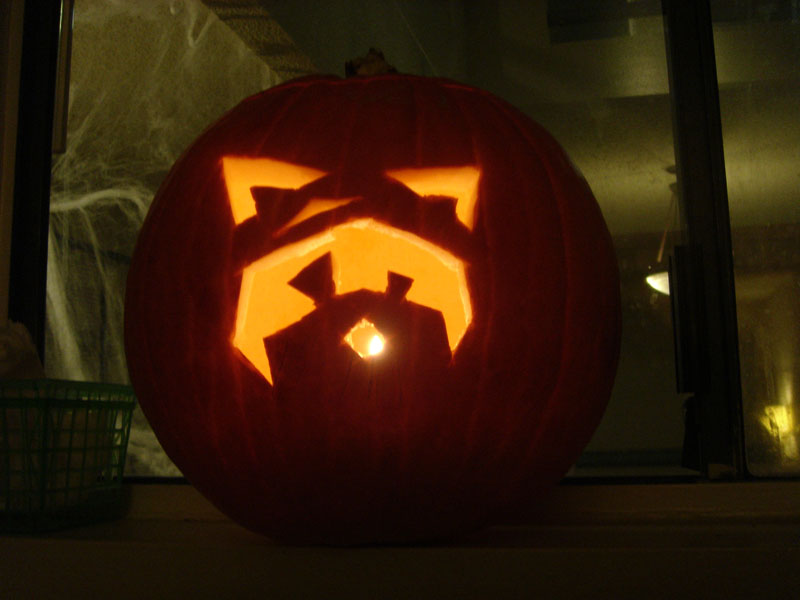 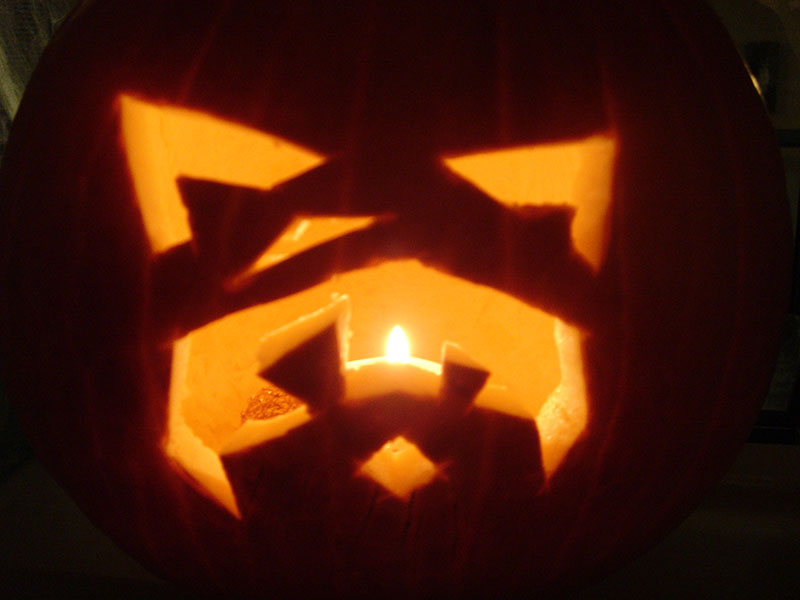 Happy Halloween, from Matt (and Raq).

All I’ve seen are a few pages of Red Star with CGI used for hardcore mechanical illustration, but the Man says such things exist.

The first problem is character design.

In illustration, the basic unit is the line. Lines suggest shapes and masses, but they can be manipulated — always — to suit their own aesthetic purpose. Notice the difference between real hand-drawn animation and the stiffness of toon shaded CGI. Toon shading is cute, but it’s nostalgia. If you want to draw, learn to draw.

In illustration, lines are easy, shading is hard; in computer graphics, it’s exactly the opposite. Learn to light, and the software takes care of shading. Edges — lines — are a byproduct. Models are models. You don’t draw in 3D: you sculpt. You build.

The basic unit of CGI characters is the mass, and that’s where you need to go to get personality. Character design in CGI is more than trying to fudge an illustration to life in 3D. What’s on what, near what, across what? How does it fit together? Solve those questions or you’ll never get beyond flat, lifeless Poser-porn.

And that’s only the first problem. 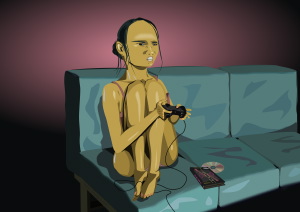 The third run is always the hardest, when you’re getting back into it. The first run you expect to be bad. But it’s never as bad as you expect. The second you expect to be hard, and it’s not, for the same reason. But that little mental trick stops working by the third run, leaving you feeling discouraged and disappointed in yourself.

“Videogaming” is the latest sketch I’ve decided to call done, after a sad amount of time and work. It’s vaguely risque/NSFW. The pose is overlapping and closed-form, but not as active as I would have liked. The facial expression is passable, which is a relief. The Inkscape file, of course, includes the blocking in a hidden layer, and a couple of alternate poses in another.

And yes, that is the official videogame for “Hot” she’s playing. 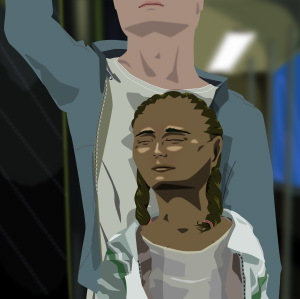 A day late for Valentine’s Day, another sketch I’ve decided to call done. I wanted to make more intimate use of perspective this time, and do a little more with color. An extreme color palette would probably require doing a color key ahead of time. This Inkscape file includes a hidden “scaffolding” layer used for blocking out the drawing, and seperate layers for the girl, the boy and the background.

A quick Inkscape sketch from the other night: 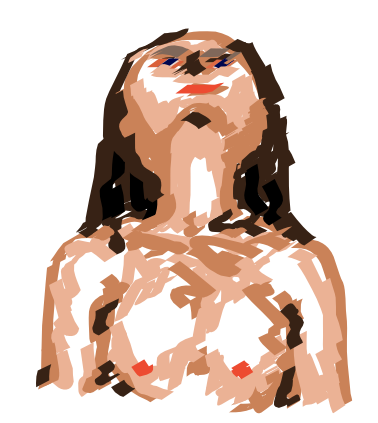 What We Think They Say v.s. What They Actually Say 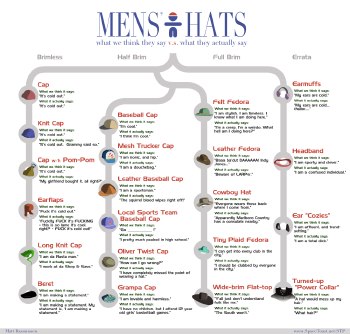 Something for the ladies? Perhaps you’ll enjoy this old favorite: A Chart of the Pressures Facing an Essentially Straight Modern Woman. 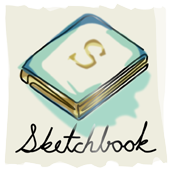 In my dreams there’s another Boston.

Where the Fenway and the E train should be there’s an expanse of rundown, uninteresting concrete buildings. Maybe there’s another line south of the E train.

Last night, after the flat concrete section came a neighborhood of steep hills with equally rundown platforms, roughly where Roxbury should have begun.

To the west, where Brookline should have been — or at least the no man’s land between the D train and Coolidge Corner — was a shabby, Allston-like, busy Y-shaped intersection. There was a place I needed to go which was on the far side, behind the intersection, and hard to reach.

To its west, the ground sloped steadily upward for a mile or more. At the top (very high up), looking down over the city, was an abandoned set of concentric concrete terraces, enormous, an expanse of disused parking around a building that wasn’t used anymore. Sumac and other fast-growing trees were taking hold heavily on the slope.

One night, there was a posh place above MassArt. The street sloped gently upward and broke at a compact building with a glass foyer. The main street curved to the right there. Another, smaller street broke off just before the curve, behind a wedge of brick brownstones, and continued up the same hill; it was much more neglected, and seemed to be where people lived. Maybe that hill was the same as the first. Maybe they were all the same hill.

Concept: An attempt to understand said topic, rendered in the form of a nautical chart.

This work is licensed under a
Creative Commons Attribution-Noncommercial 3.0 License.

See Also: My previous infographic of the second Lancet study of Iraqi War Deaths at one per pixel, and photos of “the island” near my home town in Maine. 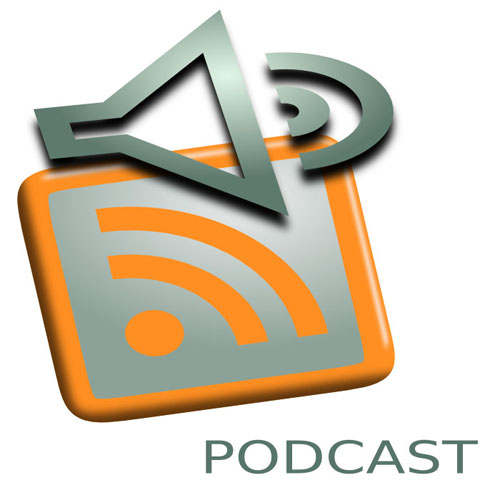 Word to the teachers who taught their kids all the verses to "This Land Is Your Land."

Voyager II is more than 8 light hours away.