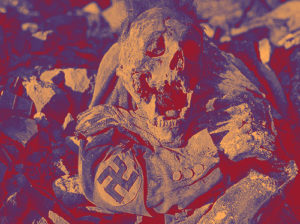 It’s worth now revisiting 1995 when Umberto Eco–child of Italian Fascism–explained to us the 14 hallmarks of fascism, be it Italian, German, Spanish, Russian or otherwise: Ur-Fascism. Here’s a gloss in reverse order; ellipses mine, emphasis his.

14. Ur-Fascism speaks Newspeak… All the Nazi or Fascist schoolbooks made use of an impoverished vocabulary, and an elementary syntax, in order to limit the instruments for complex and critical reasoning. But we must be ready to identify other kinds of Newspeak, even if they take the apparently innocent form of a popular talk show.

13. Ur-Fascism is based upon a selective populism, a qualitative populism, one might say. In a democracy, the citizens have individual rights… For Ur-Fascism, however, individuals as individuals have no rights, and the People is conceived as a quality, a monolithic entity expressing the Common Will… Thus the People is only a theatrical fiction… There is in our future a TV or Internet populism, in which the emotional response of a selected group of citizens can be presented and accepted as the Voice of the People… Wherever a politician casts doubt on the legitimacy of a parliament because it no longer represents the Voice of the People, we can smell Ur-Fascism.

12. Since both permanent war and heroism are difficult games to play, the Ur-Fascist transfers his will to power to sexual matters. This is the origin of machismo (which implies both disdain for women and intolerance and condemnation of nonstandard sexual habits, from chastity to homosexuality). Since even sex is a difficult game to play, the Ur-Fascist hero tends to play with weapons—doing so becomes an ersatz phallic exercise.

11. In such a perspective everybody is educated to become a hero. In every mythology the hero is an exceptional being, but in Ur-Fascist ideology, heroism is the norm. This cult of heroism is strictly linked with the cult of death… The Ur-Fascist hero is impatient to die. In his impatience, he more frequently sends other people to death.

10. Elitism is a typical aspect of any reactionary ideology, insofar as it is fundamentally aristocratic, and aristocratic and militaristic elitism cruelly implies contempt for the weak. Ur-Fascism can only advocate a popular elitism. Every citizen belongs to the best people of the world, the members of the party are the best among the citizens, every citizen can (or ought to) become a member of the party. But there cannot be patricians without plebeians. In fact, the Leader, knowing that his power was not delegated to him democratically but was conquered by force, also knows that his force is based upon the weakness of the masses; they are so weak as to need and deserve a ruler…

9. For Ur-Fascism there is no struggle for life but, rather, life is lived for struggle. Thus pacifism is trafficking with the enemy. It is bad because life is permanent warfare…

8. The followers must feel humiliated by the ostentatious wealth and force of their enemies… However, the followers must be convinced that they can overwhelm the enemies. Thus, by a continuous shifting of rhetorical focus, the enemies are at the same time too strong and too weak…

7. To people who feel deprived of a clear social identity, Ur-Fascism says that their only privilege is the most common one, to be born in the same country. This is the origin of nationalism. Besides, the only ones who can provide an identity to the nation are its enemies. Thus at the root of the Ur-Fascist psychology there is the obsession with a plot, possibly an international one. The followers must feel besieged. The easiest way to solve the plot is the appeal to xenophobia…

6. Ur-Fascism derives from individual or social frustration. That is why one of the most typical features of the historical fascism was the appeal to a frustrated middle class, a class suffering from an economic crisis or feelings of political humiliation, and frightened by the pressure of lower social groups…

5. …Ur-Fascism grows up and seeks for consensus by exploiting and exacerbating the natural fear of difference. The first appeal of a fascist or prematurely fascist movement is an appeal against the intruders. Thus Ur-Fascism is racist by definition.

4. No syncretistic faith can withstand analytical criticism. The critical spirit makes distinctions, and to distinguish is a sign of modernism. In modern culture the scientific community praises disagreement as a way to improve knowledge. For Ur-Fascism, disagreement is treason.

3. Irrationalism also depends on the cult of action for action’s sake. Action being beautiful in itself, it must be taken before, or without, any previous reflection. Thinking is a form of emasculation. Therefore culture is suspect insofar as it is identified with critical attitudes. Distrust of the intellectual world has always been a symptom of Ur-Fascism… The official Fascist intellectuals were mainly engaged in attacking modern culture and the liberal intelligentsia for having betrayed traditional values.

2. Traditionalism implies the rejection of modernism. Both Fascists and Nazis worshiped technology, while traditionalist thinkers usually reject it as a negation of traditional spiritual values. However, even though Nazism was proud of its industrial achievements, its praise of modernism was only the surface of an ideology based upon Blood and Earth (Blut und Boden)… The Enlightenment, the Age of Reason, is seen as the beginning of modern depravity. In this sense Ur-Fascism can be defined as irrationalism.

1. The first feature of Ur-Fascism is the cult of tradition… As a consequence, there can be no advancement of learning. Truth has been already spelled out once and for all, and we can only keep interpreting its obscure message….

One doesn't feel "quite the dandy" as much as one should anymore.

"Say, how about I punch your ugly face in the dick?"
"Sure!"
*Hawaiian Punch jingle*

These cut up sections of a shipwrecked car freighter in Georgia are, strangely enough, the most interesting piece of outsider art the 21st Century has yet produced.

Word to the teachers who taught their kids all the verses to "This Land Is Your Land."