Celebrate the 4th of July with these brand new campaign posters!

Let it be the dream it used to be.

Let it be the pioneer on the plain

Seeking a home where he himself is free.

(America never was America to me.)

Let America be the dream the dreamers dreamed–

Let it be that great strong land of love

That any man be crushed by one above.

(It never was America to me.)

O, let my land be a land where Liberty

Is crowned with no false patriotic wreath,

But opportunity is real, and life is free,

Equality is in the air we breathe.

(There’s never been equality for me,

Nor freedom in this “homeland of the free.”)

Say, who are you that mumbles in the dark?

And who are you that draws your veil across the stars?

I am the poor white, fooled and pushed apart,

I am the Negro bearing slavery’s scars.

I am the red man driven from the land,

I am the immigrant clutching the hope I seek–

And finding only the same old stupid plan

Of dog eat dog, of mighty crush the weak.

I am the young man, full of strength and hope,

Tangled in that ancient endless chain

Of profit, power, gain, of grab the land!

Of work the men! Of take the pay!

Of owning everything for one’s own greed!

I am the farmer, bondsman to the soil.

I am the worker sold to the machine.

I am the Negro, servant to you all.

I am the people, humble, hungry, mean–

Hungry yet today despite the dream.

I am the man who never got ahead,

The poorest worker bartered through the years.

Yet I’m the one who dreamt our basic dream

In the Old World while still a serf of kings,

Who dreamt a dream so strong, so brave, so true,

That even yet its mighty daring sings

In every brick and stone, in every furrow turned

That’s made America the land it has become.

O, I’m the man who sailed those early seas

In search of what I meant to be my home–

For I’m the one who left dark Ireland’s shore,

And torn from Black Africa’s strand I came

To build a “homeland of the free.”

Who said the free? Not me?

Surely not me? The millions on relief today?

The millions shot down when we strike?

The millions who have nothing for our pay?

For all the dreams we’ve dreamed

And all the songs we’ve sung

And all the hopes we’ve held

And all the flags we’ve hung,

The millions who have nothing for our pay–

The land that never has been yet–

And yet must be–the land where every man is free.

Whose sweat and blood, whose faith and pain,

Whose hand at the foundry, whose plow in the rain,

Must bring back our mighty dream again.

Sure, call me any ugly name you choose–

The steel of freedom does not stain.

From those who live like leeches on the people’s lives,

We must take back our land again,

I say it plain,

America never was America to me,

And yet I swear this oath–

Out of the rack and ruin of our gangster death,

The rape and rot of graft, and stealth, and lies,

We, the people, must redeem

The land, the mines, the plants, the rivers.

The mountains and the endless plain–

All, all the stretch of these great green states–

Langston Hughes (1902-1967) was one of the greatest American writers of the Harlem Renaissance. This poem was posted today on 3 Quarks Daily in honor of this historic day. I wished to reproduce it in full, as it sums up a number of my more Danish feelings this morning.

For the benefit of the archive, Barack Obama was last night declared President Elect. Democrats have taken simple majorities in the House and Senate. Here in California, a parental notification law for pregnancy termination by minors has failed, but Proposition 8 — which I volunteered in opposition to — has passed, revoking the right of same-sex couples to wed. Similar measures have passed in Florida and Arizona. While it may be arguable that the Republican Party is in shambles this morning, with it’s largest national figures now tied either to the losing Presidential ticket or the historically unpopular Presidential administration, immense burdens lie ahead for all Americans in the arenas of financial restructuring, job creation, universal health care, climate change, the national debt, and human rights. The mistake of the progressive movement of the late 1960s-early 1970s was believing that they had won simply by showing up, their neglect leading inexorably to the Neoconservative revolution of 1980 which continues to defy responsibility on all of the above issues. May we not fail again.

I believe in accountability. I believe that no crisis removes an American’s responsibility to uphold the Constitution. As a result, I feel duty-bound to oppose Senate Majority Leader Harry Reid’s bill granting American telecommunications companies retroactive immunity for any illegal wiretaps they may or may not have performed at the behest of the National Security Agency and the White House in the years following September 11, 2001.

Were the issue one of protecting companies acting in good faith, a cap on settlements would be proper. Granting immunity instead dismisses all present and future court cases, removing the public’s only avenue of discovery regarding the reality or extent of any illegal actions taken. Crisis does not justify barbarism.

Very little can be done by the public at this point. I’ve summarized my moral argument and sent it to lobbying group The Electronic Frontier Foundation’s Stop the Spying campaign in the form of the photo below: 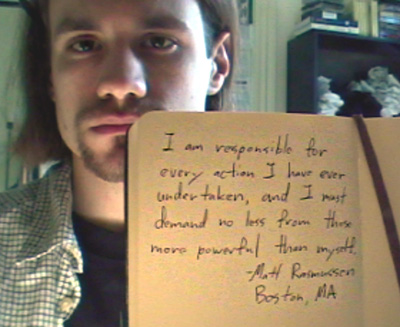 As a postscript, I regard Reid’s bill as another example of the spinelessness that caused me to leave the Democratic Party.