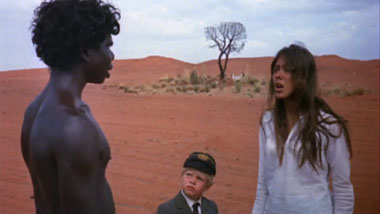 A man drives his son and teenage daughter (credited only as White Girl and White Boy) into the outback, lights the car on fire, tries to shoot them, and caps himself. Young aborigine (Black Boy) finds them, helps them return to civilization. Film.

This isn’t a movie that’s seen very often anymore, which is a shame.

I actually first saw Walkabout in a film class in high school. We had a video projector on the cyclorama of the school stage jury-rigged into a quasi-cinema. Our teacher, having spent his ’60s youth (and met his Kiwi wife) hitchhiking around Australia and New Zealand (in a way very foreign to a ’90s teenager) didn’t seem to have actually sat down and watched the movie through in some time. Being reminded how risqué it becomes at times, the class could see him squirming, but we wouldn’t let him turn it off.

What a remarkable film. It has moments that’ve stayed with me ever since, through film school and beyond. Interestingly, the current rage that year for us Black Boy/White Girl-aged students had been Aussie Baz Luhrmann’s overclocked refresh of Romeo + Juliet. The two might make an interesting double feature.

I’m beginning to wonder if Dark Water is Hideo Nakata’s masterpiece. It drills down through the cosmic terror of The Ring to something far more intimate: The fear of abandonment. We see the child’s fear of abandonment not only in the repeated scenes of one being left after the close of school, but in the adult characters eyes as, by proxy, they’re forced to re-experience its gnawing toxicity. The water, the intrusion of darkness into the rainsoaked day, and the intrusion of water into the spaces and times it’s not meant to be in all mirror that forgotten feeling. The breaking of a child’s trust in the parent, which is also the child’s trust in the world, is a trauma that even adulthood can’t banish forever. Watching an imperfect single mother struggle to hold her own crumbling world together against that invading fear is heart-wrenching. All horror is psychological horror, crystalized in the moment of realizing one has been wrong. Dark Water is Nakata’s most emotionally draining film and that, I believe, may make it his finest horror film. Hell is being alone forever.

“And sometimes there’s no one there. And there isn’t going to be.” — Michael Ventura, Shadow-Dancing in the U.S.A.

Wall-E is the perfect expression of what it’s like to meet a modern woman. She’s sophisticated, sleek, brilliant, beautiful, focused — and something of a pyro. You’re a bit clever perhaps, but otherwise the only thing to recommend you is that you’ve somehow managed to survive this long.

Steven “No You’re Thinking of Billy” Baldwin is a dead-to-the-world insomniac somnambulist. He also plays one in this film. Deep in Canadian Chicago, the Born Again Baldwin has been accused of murder — and all ridiculously improbable signs point to same! A C-list cast works heroically to make Steven look almost competent amidst their shrill overacting. The screen fairly pops with references to trannies, porn theatres, MMFF, midgets, dirty old men, animal abuse and leather-clad lesbians. Despite these apparent advantages, and despite padding fifteen minutes of plot with an hour of bad (“clever?”) dialogue, it makes little satisfying sense in the end. (I have a theory that the film was designed to ritualistically cleanse Steven of his pre-twiceborn/ongoing excesses.) Don’t miss Michael Ironside playing Michael Keaton playing Beatlejuice playing Jack Nicholson playing R. P. McMurphy in One Flew Over the Cuckoo’s Nest as… probably another thing Steven’s been trying to swear off. Dead Awake is an incoherent hour and a half with a five drink minimum — this is truly what it’s like to be a Baldwin.

Not a bad story. The language was very well used. I found the black dog myth and the narrator’s guiltless infidelity a bit hard to lash together thematically, and some of the descripive passages and long flashbacks made my attention wander.

But I have a request. Referencing the “mini generation gap” comment I made on “The Apple Tree Man,” could we hear a bit more from the under 40 crowd on future Pseudopods? I’m sure doing abhorrant things with a wife and kids at home is viscerally arresting once you have them, but trust me: down here, clawing our way into a dead and cynical global economy, there is horror aplenty.

This seems to be the summer of grand refutation for the “more is better” blockbuster. Spiderman 3, Shrek the Third, and the upcoming Live Free or Die Hard and The Bourne Ultimatum all seem designed to provide more of everything, but less of what we want. Pirates of the Caribbean: At World’s End is no exception.

Pirates 3 is a huge, clattering, whirring, blurring, shooting, smashing mashup of everything from the first two. Everything is bigger, everything is more. Every character is back. You’ve seen boarding scenes, but not like these — never this huge, never this chaotic. You’ve seen naval combat, but you’ve never seen a ship literally chewed apart by cannon fire. It’s fun while it lasts, and it lasts a long time, so why does it all boil down to a grand feeling of huh, well, all right then?

Pirates 3 is intensely all right, which alone makes it much more worth our moviegoing dollar than most of the summer blockbusters we’ve sat through. Most attempts at the kind of guiltless, unapologetic fun of Bruckheimer and Verbinski’s Pirates series fail. It turns out that popcorn movies aren’t easy. Pirates 3 has an extraordinary level of craftsmanship and amazing stats, but it also has a great deal of control — the most frequently missed ingredient of such blockbusters. What it does miss are two apparently contradictory elements: focus and chaos.

Picture a movie as a two-dimensional graph, on which anything can be placed; the only rule is the x-axis, which is time. Where the movie deviates toward the bottom of the graph, it moves toward focus. The movie knows what it’s doing, why it’s doing it, and how it’s certain to accomplish it. This is focus, in movie terms. Gosford Park is the most focused film you will ever see. It’s also one of the most boring experiences you will ever sit through.

At the top of the graph is chaos; here lies invention, awe, the subconscious. The non-narrative films of Matthew Barney lie entirely at the top of the graph. Even the apparent dips toward structure — the bike race in Cremaster 4, or the opera in Cremaster 5 — are just feints. Whatever internal logic or focus the filmmaker may have in mind, it’s not presented in the film.

At the bottom of the graph, Pirates 3 suffers, generally on the burdens of being the third of a largely unplanned trilogy. There are so many characters, so many plotlines. Betrayals happen so quickly and frequently from all sides that their resonances seems to cancel each other out, like plucking a guitar string from both ends at random. Who are the most important characters, what do they need to accomplish, and how? The movie jerks all too frequently toward the bottom of the graph, but never takes the time to make a solid, meaningful drive.

At the top of the graph, only one thing needs to be said: The characters take a trip to the afterlife. What makes the afterlife unique? Not very much, really — same sea and sky, same cinematography. The best we ever get is Captain Jack Sparrow’s private purgatory as a salt flat and a series of heat hallucinations. The mythical Far East is a series of generic nighttime sets which blow up predictably. Intangible sexual tension, which obeys its own unknown rules in the movies as it does in real life, is almost entirely absent. The movie wrongly believes that it’s in too much of a hurry to ever just stop, take a breath, and look around.

Pirates of the Caribbean: At World’s End lies almost entirely in the middle of our imaginary graph, delivering with verve and finesse all of the audience’s desires, except for the desire to dream.