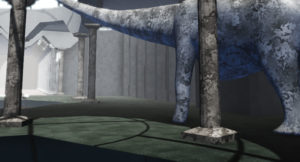 The House of Time, a scale model of earth history, public beta v0.3 is now live. While it’s still pretty empty, this is the first release where I feel the important pieces are all in place (if only as stubs).

The House of Time, a scale model of earth history, is now in public beta v0.2. 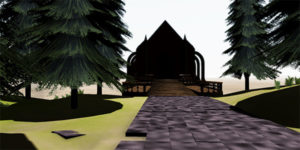 The House of Time, a scale model of earth history, is now in public beta. Introducing v0.1.

You visit a page and find a punched metal gate, with an arrowhead design on one half and an Apollo capsule on the other. It slides open. You realize this is a 3d scene, like a game, and you can move about with familiar keyboard, mouse and touch controls.

The fog rolls back to reveal a paved driveway leading to a museum-like facad ahead. The outlines of animals line the walk. Strange animals

You hear your footstep as you pass through the thin gate, stepping over a drain and past some grassy planters. You cross the turnaround circle and mount the steps.

Inside, sunlight streams through a modernist glass domed roof, falling on stone sculptures of dinosaurs. Titanosaur towers over you. Beneath your feet, a plexiglass floor shows creatures from the sea. On you pass into an older-looking part of the museum. More creatures: Allosourus, stegosaurs. Forward into a gothic section, with still more creatures: plainer somehow, more crocodile-like. You pass outside again through a charred portal, burned to its hinges.

Outside, sailback lizard sculptures bask in the sun of a palatial back veranda. You descend the steps into a stand of pines and ferns. The path continues. Lonely, rough-hewn sculptures in rusted metal mourn a world they once ruled. Soon there’s nothing but a thick carpet of trilobite fossils, crunching beneath your feet. A plain marker declares even their end.

There is nothing but the scrub, the path, the sun. Occasional stone columns pass to either side.

Half an eternity later, the sun begins to set. As you pass over a small rise, the moon disappears. Below is a rocky beach leading to an endless sea. You descend as the stars come out and stand at the dark surf, watching the stars above and below.

This is the House of Time, a scale model of Earth history. Each step you’ve taken represents a million years.

It is a night of great sadness, for our friend and comrade had gone down the road where we cannot reach her. But as with all things, we will catch up with her in time, and I believe she will have many stories to tell us, and many new roles to share with the universe.

It delights me to think that what feels historical and amazing to us today—a woman sworn in to the vice presidency—will seem normal, obvious, "of course" to Kamala's grand-nieces as they grow up. And they will be right.

"After the firing squads are done with the politicians the teachers are next." -Parler

"Chicxulub is a beach resort so godforsaken you want to cry." -Werner Herzog

I want a videogame with a Dad Bod Mod.