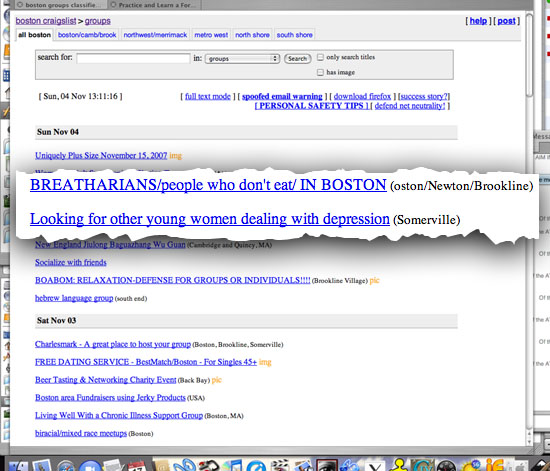 Scorn a man who says

Only what you want to hear

So let me get this straight. Now I get to watch…

If you want to show your class, next time a Presidential debate ends, don’t talk. Don’t say anything. Just give us an hour of lovely American music — Sousa, Copeland, Gershwin — and allow us to think, discuss, and form an opinion. Is consideration no longer encouraged by the people of CNN? Every person you cut to after the debate walked into your studios with an opinion they wanted to deliver before the American people on prime time tv. That’s the candidates’ job.

WHEN CHRISTINA Capone moved from her digs in New York she had a bit of anxiety about abandoning the hustle and bustle of “the city.” She was ready to head back to her hometown of Boston, but didn’t want to trade off on her urban lifestyle. “I was nervous when I looked at places in Beacon Hill because there was nobody on the streets,” said Capone, 26, who works in the media department at Hill, Holliday, Connors, Cosmopulos Inc. The solution — a modern, two-bedroom, door-man building on Newbury Street. Needless to say, she hasn’t missed a beat. “The constant motion is so important to me,” said Capone, while gazing down from her third-floor apartment at the consistent flow of shoppers passing Niketown and the oh-so-cosmopolitan diners heading into Armani Cafe. The floor-to-ceiling windows in her spacious abode help to absorb the energy of the city’s most fashionable street. The glass coffee table, khaki-colored couch peppered with primary-colored pillows and modern art on the walls pulsate urban sophistication. “The inside reflects the outside and the energy of the city,” she said. Although a posh place on Newbury can be a bit of a drain on your wallet, the convenience makes up for all the cash you’d be dumping into a car, said Capone. “My mentality is that there is no reason to drive. Everything should be in walking distance,” said Capone. Whether it’s a fresh salad from Scuzzi a block away, or a pasta dish from Piattini Wine Cafe across the street, everything is right at your fingertips. And, although Capone admits she does have a weakness for the trendiest purses at Luna, which she stores nicely in her walk-in closet, the rest of the swanky shops don’t tempt her. “I’m lucky that I don’t have a shopping problem,” said Capone.

Thank you for this weekend’s Home section profile of Christina Capone’s “New Pad on Newbury.” Might I, however, submit a somewhat different profile?

After five months of post-college job seeking, animator Matthew Rasmussen, 24, settled into an hourly-wage position selling tickets at a local museum. He now rents (not owns) a room in a four bedroom Inman Square apartment, which features a living room, a porch with peeling paint, and a mostly-functional kitchen. Rasmussen’s bedroom is tastefully appointed with a desk of his own construction, an oak futon, and a prefab bookshelf. A geranium by the window, perched jauntily atop a milkcrate, quietly pulsates urban sophistication when it needs to be watered.

Lindsay B. LeClair lives in an apartment with floors so uneven that even the

shelves are falling over, but it’s otherwise cozy and sunny, with a kitchen to

beat the band. She is cohabiting with her boyfriend of nearly five years,

Boston if she didn’t share a bedroom. It’s too bad, really, that this

convenient apartment is nowhere near a grocery store. The young couple was

really counting on Lindsay’s beater car to make up for that. All jokes aside,

the apartment is beautiful, convenient to the T barring, if convenience

includes strolling through an industrial, lifeless bioengineering square where

that’s what it smells like. In spite of all that, Lindsay is very happy in

As it whirred away, I actually thought to myself: Wait, what if nose hairs have a protective effect against the coronavirus?

It's curious how point clouds have become the wireframes of the 21st century, aesthetically.

"McCarthy and the Gazette believed suppressing communist political thought was a sign of strength, but in reality it was a sign of weakness symptomatic of an irrational fear that their policies, if measured against those of communists, would fail to win the hearts of American…